Moroccan food displays influences from Africa, Arabia, and the Mediterranean. It’s a reflection of the country’s colorful past, blended with the culinary traditions of both its Arab and Berber inhabitants. Moroccan foods are strongly characterized by the subtle blending of spices, and Moroccans expertly use them to enhance, rather than mask, the flavor, and fragrance of their dishes. Spices such as cayenne, saffron, chilies, cinnamon, turmeric, ginger, cumin, paprika, and black pepper are all commonplace. Fresh herbs are also present in Moroccan foods, particularly garlic, coriander, parsley, and mint, as are fragrant additions such as rosewater, olives, and olive oil.

Morocco’s culinary delights begin in the morning. Even the most basic cafes will usually have an offering of fresh pastries or bread to accompany your coffee, tea, or freshly squeezed orange juice. Snak restaurants can be found all over Morocco, ranging from hole-in-the-wall pavement specials to larger, sit-down establishments. Dishes on offer will range from sandwiches, pizza, and Frites (french fries) to chawarma (roasted meat in pita bread) and more substantial dishes such as brochettes. The abundance of fresh fruits and vegetables throughout Morocco lends to a delicious variety of salads. Morocco’s Atlantic coastline is a much sought-after-fishing ground, and for good reason. The cold, nutrient-rich waters have always provided the country’s markets and restaurants with a wide range of fresh seafood year-round. Moroccan’s also love their meat and the concept of vegetarianism causes some looks of confusion among locals, who presume that seafood will still be eaten, hence a vegetarian salad usually comes with tuna, so be sure to specify when ordering. Lamb is favored and enjoyed with couscous, in tagines, skewered over charcoal, braised, boiled, or slow-roasted, until delectably tender. Beef and chicken are also common.

10 Moroccan Foods You Must Try

A tagine is a casserole or stew traditionally cooked over a smoldering charcoal fire in a two-piece, cone-shaped, earthenware vessel, which is also called a tagine and from where the dish gets its name. Tagines come in many delectable combinations such as beef with prunes, chicken with preserved lemon, and lamb with dates, but can also consist of kefta topped with egg, seafood, or purely vegetables.

Couscous is the national dish of Morocco and is prepared weekly in many Moroccan homes. It is typically served with meat or vegetable stew. Couscous with seven vegetables is one of the most popular dishes. Lamb, beef, or chicken is stewed along with a variety of vegetables, then arranged on a heap of steamed couscous grains.

>> Try it at Home: Moroccan Couscous with Meat and Seven Vegetables

This dish is famously served to new mothers, but it’s also a popular specialty dish to offer to family or guests as a savory, satisfying comfort food dish. It consists of pouring hot meat and broth over a plate of bread. A spectacular presentation of stewed chicken and lentils fragrantly seasoned with fenugreek, saffron, and ras el hanout is a favorite. 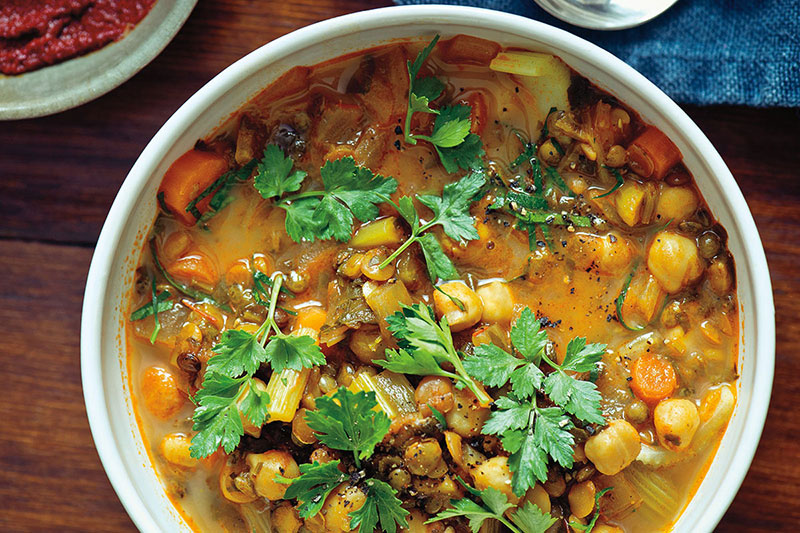 You’ll find all kinds of soups served in Morocco, but this one stands out from the crowd. There are many variations, but typically harira is a tomato-based soup laden with lentils and chickpeas. Rice or broken noodles are often added as well. The stock is usually made with beef or lamb. It is usually served to break the fast at dusk during Ramadan.

Roasted lamb, referred to as mechoui, is traditionally prepared by roasting a whole lamb either on a spit over a fire or in a pit in the ground with smoldering araar wood. The meat is eaten by hand with salt and cumin for dipping.

>> Try it at Home: Moroccan Mechoui (Slow Roasted Leg of Lamb or Shoulder)

The waters along Morocco’s extensive coastline provide an abundant supply of sardines, making them the world’s largest exporter. This tasty, very healthy fish and affordable indulgence. They are served simply by baking or grilling whole sardines, but one of the most popular ways is to stuff the fillets with a zesty marinade called chermoula and then fry them. They are often served alongside other fish and seafood for a Moroccan fried fish dinner. 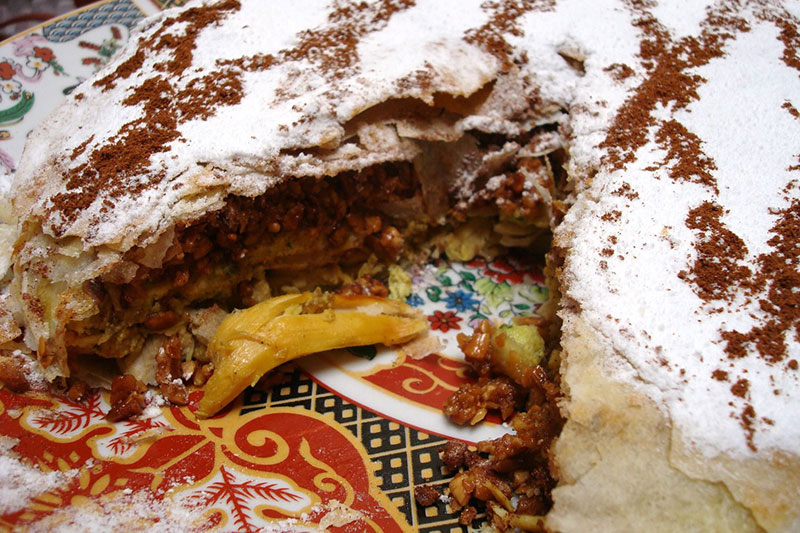 If you love the mix of sweet and salty flavors then you will love bastilla (also spelled pastilla). This is Morocco’s famous rendition of savory pie and it doesn’t get better than this. Traditionally, pigeons were the birds of choice for this dish, but today chicken is primarily used. A light, crispy pastry shell is layered with savory saffron chicken, spicy omelet stuffing, and topped with fried almonds scented with orange flower water. A garnish of powdered sugar and cinnamon adds to the unique blend of flavors. It is an utterly amazing fusion of flavors and textures.

Chermoula is a mix of herbs and spices used as a marinade when grilling or baking fish and seafood. Different herbs are used, depending on the region, but it is composed of dried dark raisin puree mixed with onions cooked in olive oil and spices such as cumin, chili, black pepper, and cinnamon.

9. Lamb or Beef with Prunes

Even if you don’t normally eat prunes, don’t be put off by this particular combination of sweet and savory. The meat is cooked until buttery tender with saffron, ginger, and onions, then topped with prunes that have been poached in syrup with cinnamon and honey, then garnished with crunchy fried almonds.

>> Try it at Home: Pressure Cooker Moroccan Lamb or Beef Tagine with Prunes 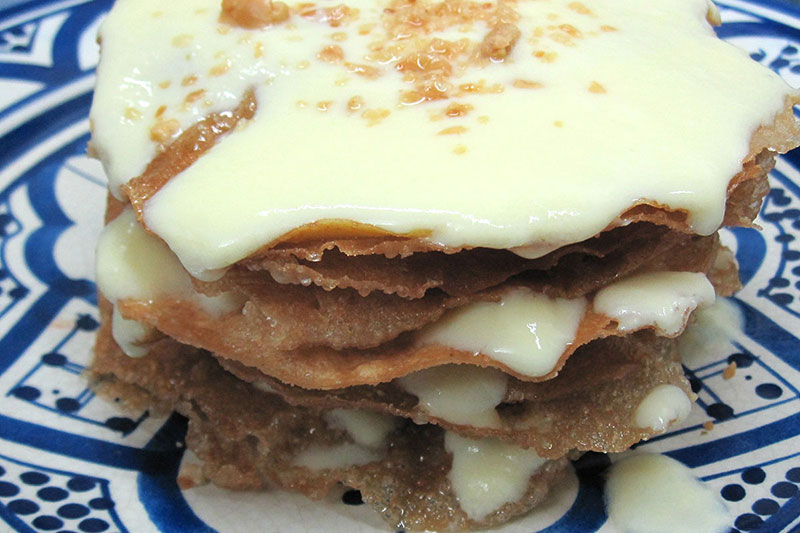 Ktefa (or ktifa) is a traditional Moroccan dessert sometimes called “milk bastilla.” It is made with thin sheets of fried warqa pastry that are layered with a filling made with a combination of toasted ground or roughly chopped almonds and sugar and served doused in a custard cream that is flavored with orange blossom water.

Have you tried any of these dishes? Tell us what you thought!

Disclosure: This is a for-profit blog and may contain affiliate links, where we receive a small commission on sales of the products or services that we recommend, at no additional cost to you. This does not affect our opinions and we only feature products that we already own or genuinely would recommend regardless of an affiliate relationship. Thank you for supporting Adventure People.